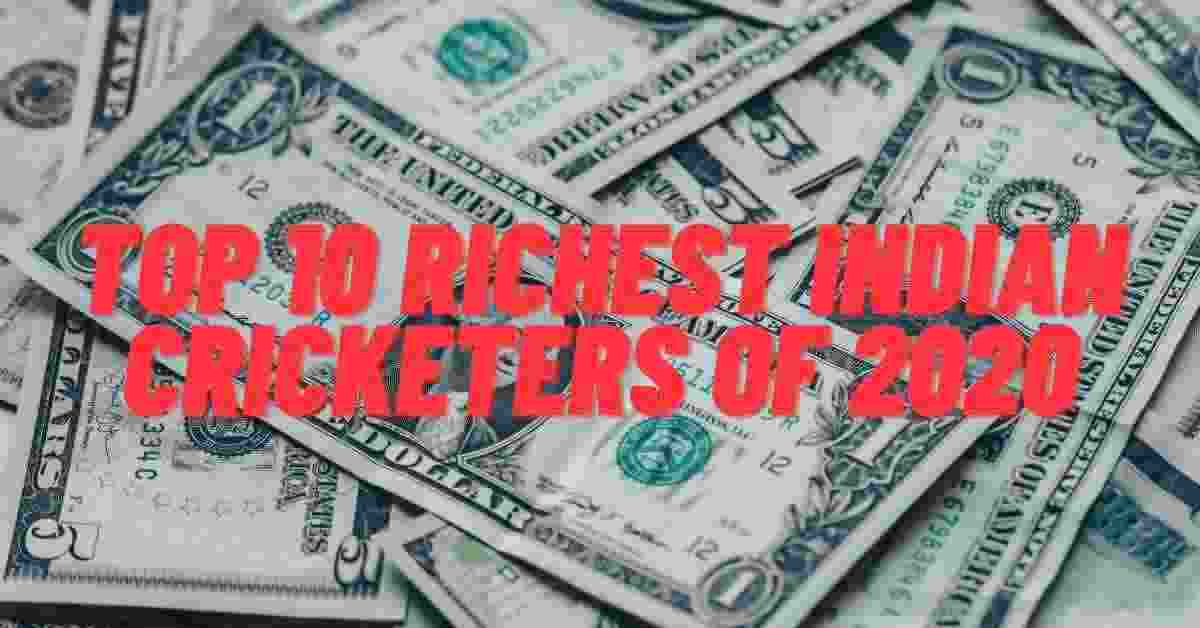 No doubt, cricket is the most profitable and popular game in India and some more countries. The craze of cricket is increasing rapidly all over the world. Almost all international cricket players earn perfect money, and especially Indian cricketers earn lots of money because India is the hub of cricket.

The craze of cricket in India is at its peak. Cricket is termed as a religion in India, and the players are god. That’s why BCCI (Board of control for cricket in India) is the richest cricket board in the world. BCCI has many revenue sources, and the best is IPL. BCCI earns it’s most of the revenue from IPL and the bid for a player in IPL is started from 20 lakh.

The players in India earn crores, and they are famous and respected more than a film star. So, today we will see the top 10 richest Indian cricketers of 2020.

Guatam Gambhir was the real hero behind the 2011 finals. He scored massive 97 runs in the finals and under a huge pressure. After the retirement, he joined politics and at present he is M.P. He holds 10th position in our list of top 10 richest Indian cricketers.

The net worth of Gautam Gambhir is 147 crores or $21 million in USD.

Suresh Raina was one of the best all-rounder of team India but due to his injury he was out of the team for a long time and now he announced his retirement from the international cricket.

Even now, he is the best all-rounder of CSK and one of the leading run-scorer of IPL and T20Is.Currently, the net worth of Suresh Raina is $25 million or approx 183 crores.

Yusuf Pathan is known for his big hitting quality. He is one of the best hitter in IPL. He plays for KKR in IPL and had played many international matches for India too. He earns frrom various sources. He has his own cricket academy, business, and many more. He also earns from IPL as he plays for KKR.

Net worth of Yusuf Pathan was predicted $26.5 million which in the terms of INR is 194.7 crores.

Rahul Dravid who is also known as “The wall” because of his awesome defence. He was the former Indian team captain who led the team successfully. Under his captaincy, team India let many milestones.

He is one of the wealthiest Indian cricketer and has net worth of $31 million or 227.7 crores in INR. He is also a social-worker and has done many social tasks.

Yuvraj Singh is also known as “The sixer king” because of his potential to hit long sixes and some past matches in which he hit 6 sixes in 6 balls. Yuvraj Singh was the hero of the 2011 world cup, and he was one of the best all-rounders in cricket history. Till now, the cricket world has never seen a batsman and all-rounder like him.

The net worth of Yuvraj Singh has been calculated approx 35.5 million dollars or 260 crores in INR.

Virendra Sehwag who is known for his attacking game. He is the best hitter ever played for India. He was a player who can hit sixes to the bowlers like Shoaib Akhtar. His main earning was and is an advertisement. Other than Cricket, his major revenue was an advertisement at that time also and now also.

Net worth of Virendra Sehwag is calculated to be 293 cores or $40 million in USD.

Sourav Ganguly, who is also known as “Dada” by his fans, is the present BCCI president. His main earning source right now is the presidentship. He is also a former Indian team captain.

Virat Kohli, known as “the run machine Kohli” is the captain of the Indian team and one of the highest-paid Cricketers in the world. He is listed in the A+ category by BCCI and is paid the most.

He is also one of the highest bought cricketers in IPL. The net worth of Virat Kohli is approximately 676 crores and $92 million in USD.

From a TTE to the richest cricketer MSD has travelled miles of distance. He is the most successful Indian captain in the history. He took team India from winning very less matches to winning almost all the matches. Mahendra Singh Dhoni deserved this moeny and fame.

Sachin Tendulkar also known as “master blaster” and “god of cricket” is one of the best batsman ever born. He holds the record of highest runs in ODI and T20 and also most centuries by a player in both the formats combined. He stands first in our list of top 10 richest Indian cricketers.

So, this was the list of top 10 richest Indian cricketers.

Hope you liked it! Thanks for reading the article. Please share it.