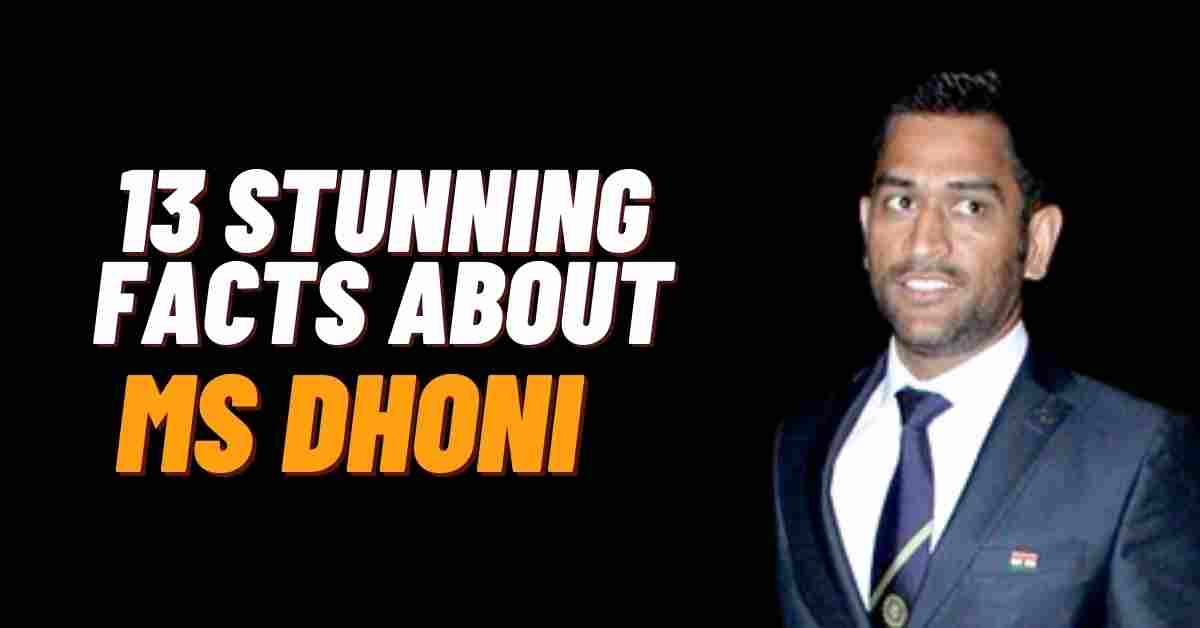 “MS Dhoni“, who don’t know about this name, this player, this awesome guy, and yes, our captain cool. MS Dhoni is the reason behind which thousands of people are living, reason for millions of cricket fans to watch cricket. But unfortunately, on 15th of August, he announced his retirement. There are several facts about MS dhoni which the world don’t know.

But, he will be seen soon in IPL and all of his fan including me are waiting to see captain cool again. Yes, no doubt you are also a die-hard fan of MSD.

Yes, i am sure you are. That’s why you are reading this post.

MSD had retired from international cricket but he is in our heart and will be in our heart till our death. His calmness, his coolness, helping nature and several more nature makes him unique. MSD attitude today is equally same as the attitude before 20 years when he had nothing.

So, without wasting more time let’s start today’s article of 13 Stunning facts about MS Dhoni that you don’t know.

Yes, MSD was run-out in his first match against Bangladesh and sadly, he was golden-duck in his debut match. But, after that rest is not unknown.

The signature shot of MS Dhoni which we see him hit big sixes was taught by Santosh Lal who was a former cricketer for Bihar (now Jharkhand state).

3. Co-owns a racing team with Nagarjuna

MS Dhoni beside football and badminton is also a great lover of racing. He with Telugu superstar Akkineni Nagarjuna owns a Racing team whose name is ‘Mahi Racing Team India‘.

4. Was inspired by John Abraham for long hairs in 2004

We all have seen MSD in long hairs in T.V. in the year 2004 and he was in trend at that time when Mushraff praised him for having long hairs during India tour of Pakistan.

5. First love was tragically killed in an accident.

We all have seen MS Dhoni smiling but there was a time in year 2002 when his first love Priyanka Jha was tragically killed in an accident.

Read on to find some more amazing facts About MS Dhoni

6. One of the highest individual tax-payer in the country

Before the cricket lover, he is a country lover. He is one of the highest tax-payer in India and the highest individual taxpayer in Jharkhand. He paid around 20 crores as tax in the year 2013-2014.

7. Only Indian captain to win all 3 ICC trophies

8. Was given the Lt. Colonel title

MS Dhoni in the year 2011 was given the honorary title of Lt. Colonel by Territorial Army of India.

MS Dhoni made his debut for Bihar in the age of 18 in year 1999-2000 where he gave an excellent performance.

MSD met his present wife Sakshi in 2007 in Kolkata where India has match against Pakistan at Eden Gardens.

MS Dhoni made his maiden first-class century for Bihar against Bengal in the year 2000.

12. Was the first India captain to help India to reach No:1 Ranking in Test Cricket

MSD was the first ever Indian captain who help and made India to reach first position in test Cricket.

13. Was a TTE at Kharagpur Railway Station

MS Dhoni also worked as a Train Ticket Examiner (TTE) at Kharagpur Railway Station from 2001 to 2003. Later, he leaved his job because of his passion.

These were some of the amazing facts about MS Dhoni which is unknown to many peoples. MSD was, is and will be a great cricketer and he will always be in our heart.

If you are a MSD fan than please share this article.