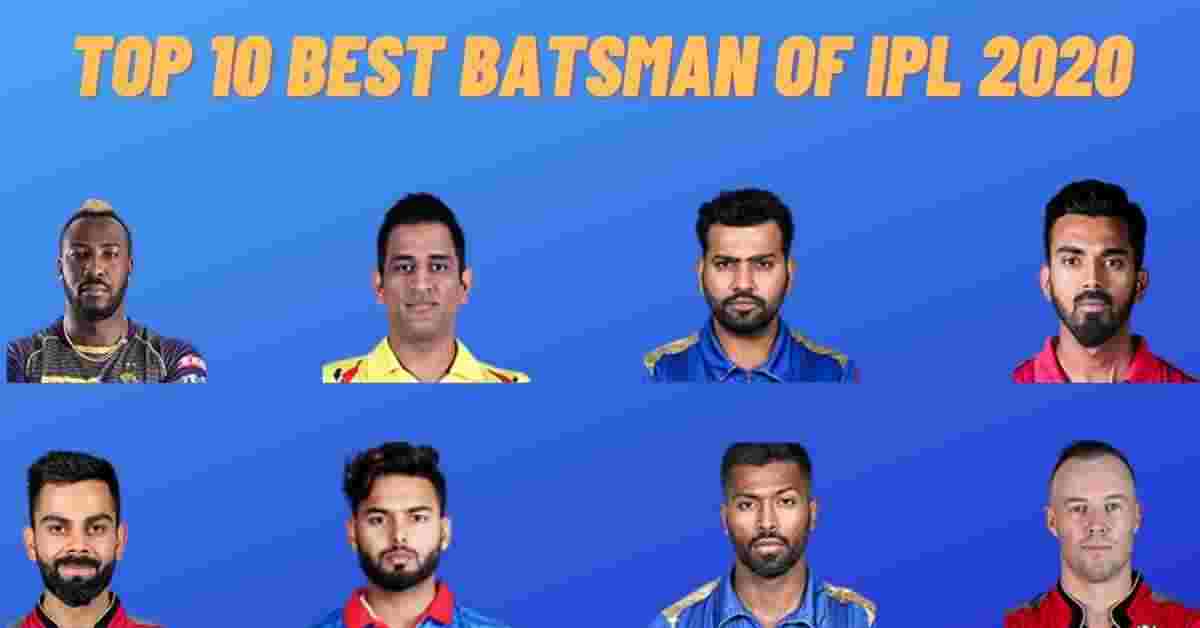 T20 Cricket has brought a revolution in the Cricket world. It has changed the speed of the game. Earlier, the batsman is trained to play only defensive shots and that’s why Cricket was somewhat boring before T20s. But T20 and mainly IPL made a huge impact on the players and game. The players are now trained to play all types of shots.

IPL has gained millions of fans in a short time because of its thrills. It’s a dream for every Cricketer to play in IPL. Many of them have achieved it and many did not. Today we will talk about 10 Best Batsman Of IPL 2020

Rishabh Pant is a young India talent who is known for his attacking mindset. He has always performed very well in IPL. He is a permanent wicket-keeper for Delhi Capitals and given DC results too. Not only from batting but Rishabh has also surprised everyone from his batting skills.

Hardik Pandya is the best all-rounder of the Indian team and Mumbai Indians at present. He has made several records. He has helped Mumbai Indians to win IPL 4 times and always ready to hit big shots whenever his team needs it.

Jos Buttler is a well-known name in India as well as in the world. He is always ready to hit big sixes. He has contributed a lot for his team, not only with his bat but also with his gloves. He is an outstanding wicket-keeper with awesome skills.

AB DE VILLIERS or Mr. 360 is the most dangerous batsman in the International Cricket till now. He do not see any bowler, he only know to hit the ball. He is capable of hitting shorts anywhere around the stadium, that’s why he is known as Mr. 360.

KL RAHUL is an awesome young talent. He has performed very well consistently. In the last two IPLs, he has scored 500+ score. That’s why he is one of the Best Batsman Of IPL 2020. He is also a permanent wicket-keeper of KXIP. In this year, he will play as a captain of KXIP.

“MS DHONI“, this name says it all. We all are known with this name. He is like a nightmare for the bowlers if he starts hitting shots. He is the most successful captain in IPL history. He has helped his team many times to win the IPL title. This year he announced his retirement from the international Cricket but he will play in the IPL 2020 and no doubt that he is one of the best Batsman Of IPL 2020.

Ro-hit man Sharma is a legend. He is captain of Mumbai Indians and under his captaincy MI has won the IPL title 4 times which is highest. Rohit Sharma is an opener but in some condition he also bats at 1st down. He has also made an unbelievable 109* runs in 2012 and after that he never looked back.

Andre Russell or the muscle-man is known for his power shots. His shots are so powerful that many fielders also don’t want to stop that. The ball after hitting his bat goes like a rocket. That is why he is known as a muscle man and that is why among the all he is the most powerful and one of the Best Batsman Of IPL 2020.

David Warner is a well-known cricketer who is basically from Australia. In every IPL, he has performed amazing. In 2016, his performance helped his team to win the IPL title. He has won Orange cap 3 times which is highest and hold the record of most half-centuries by an individual in IPL.

Virat Kohli, King Kohli or the run-machine kohli, he has gained all these titles and fame by his performance. No doubt, he is the best batsman in the world and the best Batsman Of IPL 2020 as well. He holds the record of highest run in a season by a player in IPL history. He has performed good in every match.

This was our list of the Best Batsman Of IPL 2020.

Hope you liked it! Thanks for reading. Please share it as much as you can.