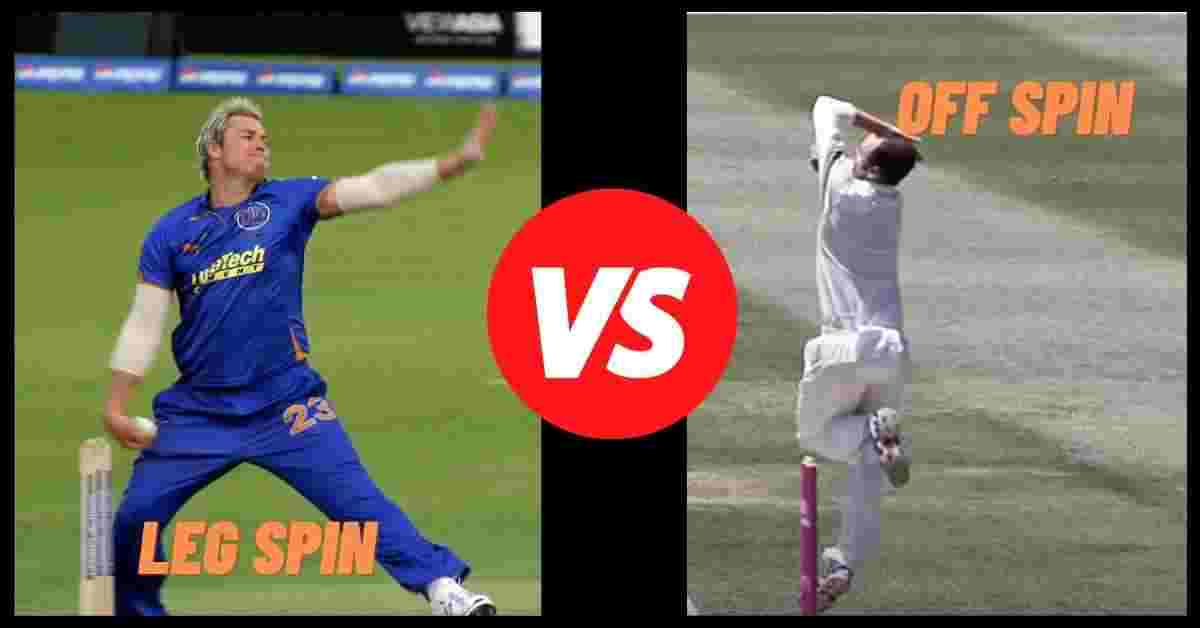 We all know that balling in Cricket is all about variations. The more you have variations, the better you can perform. There are majorly two types of spin in Cricket: leg spin and off spin and it is hard to discuss on Leg Spin VS Off Spin and which one is better.

The spinner who has many variations is usually the biggest problem for the batsman. So, do you want to become a spinner or have a slight interest in spin bowling? Then stop thinking more. It is not that much hard. You just have to learn some basics and start practising. So, let’s get started with some basics.

Leg spin means that spinning the ball from leg side to off side for a right-handed batsman. So, are you clear about it? Yes, then let’s move towards off spin.

Off spin means that spinning the ball from the offside to the leg side or towards the stumps.

So, you understood the basics, right? Now, I know you have one question that which one is better?

So, what do you think? Which factor makes a spin better for you? If you like spinning the ball much and wide variations than leg-spin would be a better option but if you like to bowl in the line and like to have better control over your delivery than off-spin is a good option.

So, both spin have their own advantages. Some people like leg-spin and some suggest off-spin. So, let’s see some of the advantages of both the spin bowling.

Some of the top advantages of doing leg spin bowling are listed below-:

Some of the biggest disadvantages of bowling Leg spin are listed below-:

Advantages of Off spin:

Disadvantages of Off spin:

Let us now see that how can we bowl these deliveries. It is not an easy task to bowl either Leg spin or Off spin. You need some tutorial. So, let’s see how to bowl legspin first.

How To Bowl A Leg spin

So, now you learnt what is Leg spin and its advantages and disadvantages. Now, let us see how to bowl a Leg spin delivery.

Try to grip the ball loosely, it will help you to release the ball easily and increase the angle of spin of the ball.

Run up for a leg spin bowling is quite simple. Just take a run up of 9 feet (It is an ideal run up distance) and release the ball. Initially during the run up, try to start slowly. It will let your run up comes naturally.

You may take up a jump for giving extra spin and power to the ball.

Release of the ball

Releasing the ball is the main point and the most hardest part of Leg spin. Usually people make mistakes here. If your release is wrong that your line and length may be disturbed and spin may be affected.

This is the point which separates a good spinner and a noob spinner. So, you have to work hard to improve it. Let’s see how to perfectly release the ball.

Try to stretch yourself high during releasing the ball and release the ball at the highest point possible. It will give your ball a good flight and spin.

To get good spin and flight, your wrist should face the sky. After all to apply the spin, spin your wrist.

If you want to learn about leg spin in more details, then feel free to click here and read our blog on leg spin.

This was all about Leg spin, now let’s see how to do Off spin bowling.

How To Bowl A Off spin

So, now let’s see how to bowl a Off spin.

The grip for a Off spin is generally same as the leg spin. Two fingers at the tp and another three at the seam. There are also many other grips to bowl an Off spin, but generally this is the most famous and easy. It is also the most effective Off spin grip. See the image given below to understand better.

The main difference between Leg & Off spin is releasing it. Both the spin has almost same grip. There are some more Off spin grips which are shown below.

In this grip, your index and middle finger get stretched more and it helps to give more spin. I have used this grip and it works like a charm. But if you are not comfortable with it, don’t try to use this otherwise you may affect your game.

Run up for Off spinners also is not a complicated thing. It is simple and same as Leg spinners. Start the run-up with slow leg movement. Make sure that you are comfortable in the run-up you are taking. In Off spin generally, the run-up of 7 feet is taken.

The main difference between the Leg and Off spinners comes during the release of the ball. So let’s see that.

Release of the ball

Releasing the ball is the main difference which makes the change in spin. For Off spin, you have to slightly flick your wrist and rotate your fingers. When releasing the ball try to bend your arm 45 degrees towards the right if you are a right-handed baller and vice-versa.

If you want to learn about off spin in more details, then click here.

Which One Spins More? Leg Spin Or Off Spin?

Which One Has More Control? Leg spin or Off spin?

So, choose one of these two wisely. If you are also a batsman then you must read this article.