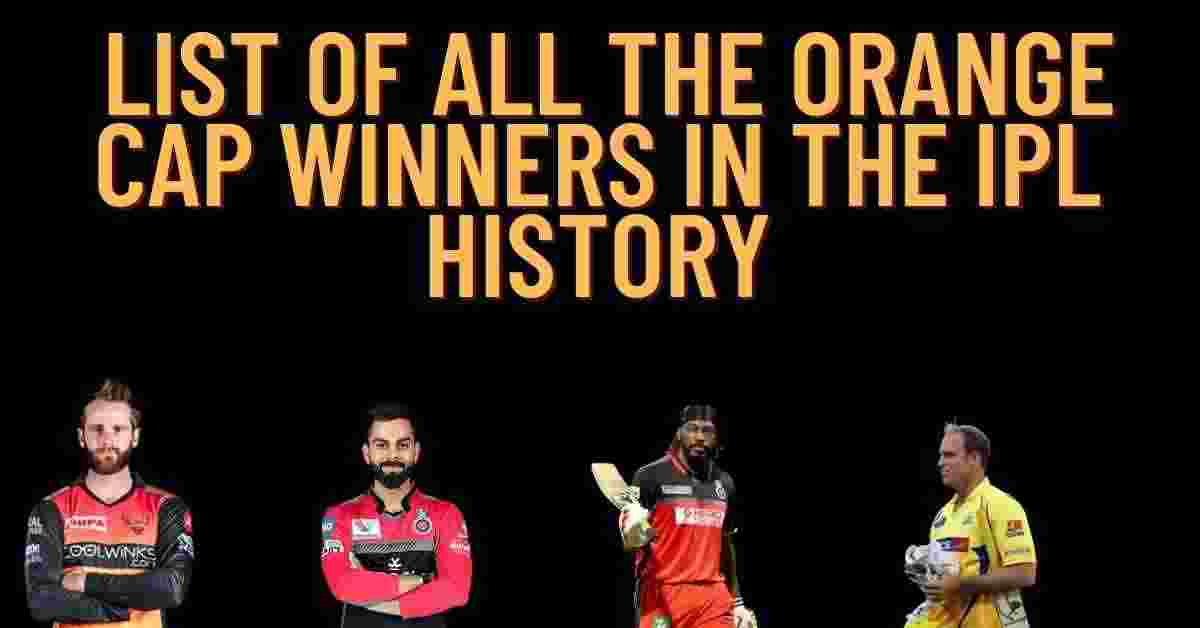 IPL is the most successful Cricket tournament in the world but no one knows in 2008 that it will become so much successful. After seeing the success of IPL many tournament has been started like PCL, SLPL and many more but no one become successful like IPL. The main reason behind it the quality of game and players in IPL and the numbers of Cricket fans in India. It is highest in the whole world.

We all love to watch IPL because of it’s thrillness. IPL is a game for batsman because of it’s short format. In IPL, there are some players who are consistently dominating the IPL by their performance.

So, today we will see the List of all the orange cap winners in the IPL history. So, let’s start it.

“Shaun Marsh” was a new name in the IPL 2008. This Australian batsman banged in IPL 2008. He made a total of 616 runs in IPL for his team Kings XI Punjab. No team in the auction knows his real potential. He was unsold in the auction but later came as a replacement and showed who is him.

Matthew Hayden is a legend Cricketer. He is also from Australia and became the 2nd australian to win orange cap consecutively. He was associated with CSK for a long time. He made total of 572 runs in that year and won the orange cap.

We all know him. “The God of Cricket“, is a real legend. He gave answer to all of his trollers who ask questions on his potential in T20 cricket. He made a total of 618 runs and helped Mumbai Indians to enter finals.

Chris Gayle also known as “The Universal Boss”, is a super attacking player. No other Cricketer can match his power, his sixes. He was criticised in the early phase of IPL as he was unable to perform well but eventually talent cannot be hidden. This happened with Chris gayle when he scored total of 608 runs in IPL 2011 and mindblowing 733 runs in IPL 2012. He brought Gaylestorm in the IPL and never looked back after it.

Michael Hussey is a well-known name in the world of Cricket. Basically, from Australia this man surprised all Indian fans because before IPL he was not much known in India. He made 733 runs in the 2013 season of IPL and helped his team CSK to reach IPL finals.

The first KKR player to win orange cap. He is highly underrated player. His batting skills, his fielding techniques and his keeping tactics are just awesome. In 2014 he proved himself to all his trollers and scored 660 runs in that season and helped his team IPL victory.

“David Warner” this name was not unknown in 2015, this Australian guy was leading the international Cricket by his performance and showed some glimpse of his talent in the IPL too. He made a total of 562 runs in that season and proved everyone that he is not a usual cricketer.

Virat Kohli or The run machine Kohli is really a legend Cricketer. India has never seen a Cricketer like him before. His classic shots, his fielding, his fitness all are of top notch. He is not a player of one format, he is the king of all formats. In IPL 2016 he set a record by scoring a total of 973 runs in one season which was never done before and helped his team to reach IPL finals but unfortunately they lost the final.

He became the first player in the IPL history to win orange cap twice. After helping his team to win the IPL title in 2016, he again scored 641 runs in the season and glorified his name again.

Kane Williamson is one of the leading and best player of SRH. He has also played as a captain of SRH for some years. He made an unbelievable 735 runs in that season.

In this article we researched about the players and put forward the List of all the orange cap winners in the IPL history in a decorative way.